Reflectivity in a near infrared (NIR) spectrum is a characteristic of the material of the object reflecting the light. It depends on its surface material, and the geometric configuration of the scene. The minimum reflectivity (minReflectivity) filter invalidates pixels with low amounts of received light (i.e., pixels on objects with a reflectivity below the minimum threshold). The reflectivity is computed from the distance and amplitude images. It can be used to discard unwanted pixels in scenes where an object’s reflectivity is known in advance. It can also be used to identify highly reflective objects in a scene; a threshold of 200 would invalidate everything but the retro-reflectors.

In the image below, we show objects with their measured reflectivity. In this case the reflectivity depends on the material of the object only because their surfaces are seen under the same angle relative to the surface’s normal. The estimated reflectivity might vary for the same object seen under varying angles to surfaces normals. Note that this pertains to reflectivity in the NIR spectrum. Some objects might show a higher or lower reflectivity than expected in the visible spectrum. 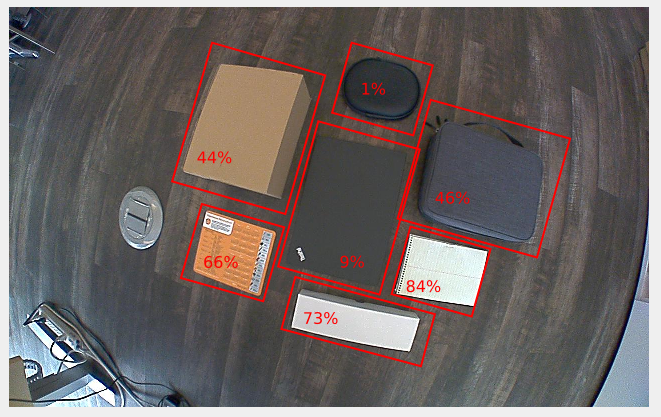 In the table below, we show the computed distance image for the default settings of the O3R heads with different values for the reflectivity threshold minReflectivity:

Note: In the first image, some pixels are missing from the side of the object. This area of the object does not reflect enough light, even when a low reflectivity threshold is allowed.